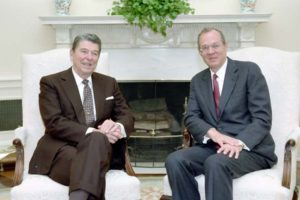 Anthony Kennedy is going to be the man on the hot seat Monday.

You can rest assured the U.S. Supreme Court associate justice knows it, too.

It’s the final day of the court’s current term. Justice Kennedy has been on the high court bench for 29 years. He’s the senior member of the court.

There’s some chatter around Washington, D.C., that Kennedy is going to announce his retirement from the bench on Monday. It’s reported that there will be a reunion of Kennedy’s law clerks on Monday; they’ll sit around, slap each other on the back and swap memories of working for the justice.

If he does retire, and it’s not altogether certain he will, you can bet that the fight to succeed will make the Neil Gorsuch battle look like a day at the beach in comparison.

What sometimes gets lost in discussions about Kennedy is that he wasn’t President Reagan’s first choice for the high court appointment; he wasn’t even the Gipper’s second choice. The first pick, Robert Bork, was rejected by the U.S. Senate after a bitter confirmation hearing and debate; the second choice, Douglas Ginsburg, withdrew his name from consideration after he admitted smoking marijuana while in college.

Along came Anthony Kennedy, who the president hoped would be a stellar conservative on the court. Justice Kennedy has turned out to be a centrist, a swing vote, someone who’s sided with liberal justices as well as conservatives on key decisions.

And therein lies the crux of the battle that would consume the nation’s capital if Kennedy decides to hang up his robe.

The day a swing justice or a liberal justice retires or is otherwise unable to serve is the day all hell will break loose as long as Donald Trump is president of the United States.