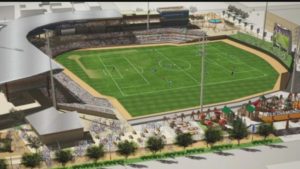 I’m still trying to process the news today of the arrival of a AA baseball franchise in Amarillo.

The meter is now running. The San Antonio Missions are moving their franchise here in time for the start of the 2019 Texas League season. That means the multipurpose event venue — aka the ballpark — will need to be completed in time for the first pitch.

It’s going to cost about $45.5 million. Yes, it’s more than the $32 million price tag attached to the November 2015 citywide referendum that voters approved. It doesn’t bother me that the cost escalated. Why? Because the plan is for the MPEV to be funded through hotel occupancy tax revenue.

The grumbling has begun. Some folks might not want the ballpark to be built. They believe the city has too many other needs that attention. Roads and streets; parks, police and fire protection … those kinds of things.

I’ll concede that I am not an urban planning expert. I have gotten around the country a good bit over the years and I’ve noticed that vibrant cities have one thing in common: a bustling, busy and active downtown business/entertainment district.

My wife and I just returned from a nearly 3,800-mile road trip. We witnessed plenty of pizzazz in places like Nashville and Memphis, Tenn. We saw more of it in Roanoke, Va., a city that’s quite a bit smaller than Amarillo, but which boasts a highly attractive downtown district. I do not know all the particulars of those communities, so my perception is based on first impressions.

I do know a bit about Amarillo’s personality and my sense is that the city’s population — which is on the cusp of 200,000 people — is going to respond positively to the development that will follow once the ballpark is built.

Moreover, the word will get out. The city’s marketing gurus need to find creative ways to send the message well beyond Amarillo’s corporate borders that this city is a happening place.

What, then, might happen? Those hotels that have sprung up all along Interstate 40 are going to fill up. Revenue will pour in. The city will be able to invest that revenue in the kinds of projects that will improve the city’s image and lure even more activity into this community.

The announcement today completes just the first phase of the city’s redevelopment and revival. The City Council, the senior city administration and the Local Government Corporation have received the commitment they wanted from a professional sports franchise to relocate here.

The ballpark is the critical element that lured that franchise to this city. There’s little time for dawdling and delay. Work needs to begin soon.

And when it’s finished, I am willing and ready to suggest that the entire city will reap the reward.

One thought on “When it’s built, MPEV will benefit entire city”