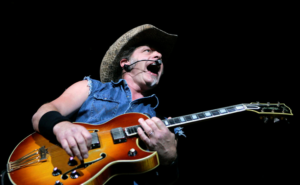 It doesn’t hurt as much as you might think to say something positive about someone who’s behaved quite repulsively for longer than I can remember.

Ted “Motor City Madman” Nugent, the fiery guitarist/rock singer known to spew hate, has decided to forgo his disgusting past.

The guy who once called Barack Obama a “subhuman mongrel” and referred to Hillary Clinton as a “worthless bitch” says the shooting this week that injured several people practicing for a congressional charity baseball game has forced him to rethink his ways.

He said he is going to eliminate the hate speech that has peppered many of his political remarks.

Nugent vows to be more respectful

This is another positive outcome from the shooting that injured GOP House whip Steve Scalise and four others. Scalise and his Republican colleagues were practicing for the game they played congressional Democrats when a gunman opened fire.

Nugent said: “At the tender age of 69, my wife has convinced me that I just can’t use those harsh terms. I cannot, and I will not.”

Perhaps the “Madman” has been part of a greater societal problem. Political adversaries have become enemies. The political venom has been spewed from both sides of the political aisle. Members of Congress — Republicans and Democrats — have spoken in the past two days of burying the raw animosity. I welcome that expressed change of heart, too.

So it is, then, that a musician with something of a political following of his own has weighed in with a vow of relative civility in the wake of a story that has dominated the headlines of late.

I hope it sticks.