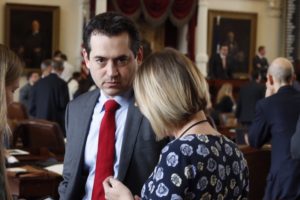 I am glad at the moment to be living far from Austin, the capital of Texas and the place where state legislators ended their 2017 session with two of them threatening physical harm to each other.

Whatever happened to the late Robert F. Kennedy ‘s notion that politics could be a “noble profession”? It ain’t. Not in Texas. Not these days. I would have hated to have been hit by a stray bullet.

Just think: Gov. Greg Abbott just might call these clowns back into special session to wrap up some unfinished business, some of which might include enactment that idiotic Bathroom Bill that would require people to use public restrooms designated to the gender noted in their bleeping birth certificate.

As for the end of the 2017 regular legislative session, two House members got into each other’s face as a scuffle broke out on the House floor. Some illegal immigrants reportedly raised a ruckus. One lawmaker, Democrat Poncho Nevarez threatened “to get” Republican Matt Rinaldi after Rinaldi called immigrations agents to break up the disturbance that was caused by the illegal immigrants.

By “get,” Rinaldi presumed Nevarez intends serious physical harm, to which he (Rinaldi) responded by threatening to put a “bullet in the head” of his colleague — in self-defense, of course.

Good ever-lovin’ grief, fellas. Nevarez should have kept his trap shut and Rinaldi should have refrained from threatening to shoot Nevarez.

Hey, guys, here’s a flash for you: Texas is in relatively good financial shape. Yeah, we have our issues. We have differences of opinion, most certainly differences of philosophy and ideology.

For this kind of tough talk to erupt at the end of a legislative session — which lasted all of 140 days — is ridiculous, outrageous and disgraceful on its face. House rules prohibit demonstrates from the gallery; the demonstrators broke the rules, period! That’s where it started and how it went from bad to stupid.

If Abbott is going bring you folks back to Austin, my hope is that he waits a while before setting a date. Reps. Nevarez and Rinaldi need to cool off, collect themselves, catch their breath — and count their blessings.