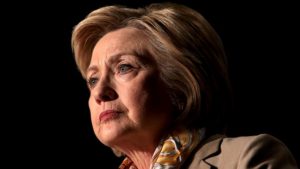 Let’s stipulate something right up front: Political historians and journalists have a monumental task on their hands trying to assess and analyze the mind-boggling results of the 2016 presidential election.

Hillary Rodham Clinton, the candidate who lost the election to Donald John Trump, did not make their jobs any easier when offering her own view of how she snatched defeat from the jaws of victory. Clinton spoke during a Women for Women conference in New York City.

Clinton took responsibility for the errors she made. She has determined that she ran a flawed campaign. She also said FBI Director James Comey’s letter to Congress revealing that he was taking a fresh look at the e-mail controversy played a part; so did the release of data from WikiLeaks, which raised questions among undecided voters about Clinton’s candidacy.

“It wasn’t a perfect campaign — there is no such thing — but I was on the way to winning until a combination of Jim Comey’s letter on Oct. 28 and Russian WikiLeaks raised doubts in the minds of people who were inclined to vote for me and got scared off,” Clinton told CNN’s Christiane Amanpour.

She also blamed a latent misogyny among voters who just couldn’t vote for a woman to become president of the United States.

Was it Comey? The WikiLeaks release? Misogyny? Campaign incompetence?

All of the above.

Hillary did note something that continues to rumble in the president’s craw, which is that she did win nearly 3 million more popular votes than Trump. She just was unable to win in those Rust Belt states that had voted twice for Barack H. Obama.

I’ll just add as well that pollsters took a lot of heat in the immediate aftermath of the election. But get a load of this: The RealClearPolitics average of polls shows that Hillary won the popular vote by a bit more than 2 percentage points, which is just about where the RCP pre-election poll average had pegged it.

What we have here is a perfect storm of circumstances that produced the most shocking U.S. political upset of, oh, the past 100 years.

Good luck, political historians, as you sort all of this out.