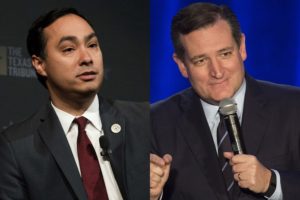 I swear I thought I could hear the faint chants way off in the distance.

And on it goes.

They could be coming from breathless Texas Democrats who have worked themselves into a tizzy over news that U.S. Rep. Joaquin Castro has decided to forgo a challenge to U.S. Sen. Ted Cruz in next year’s mid-term election.

Thus, the way is cleared among Democratic Party loyalists to rally behind the candidacy of U.S. Rep. Beto O’Rourke, who’s been barnstorming our massive state of late, acquainting himself with Democrats who want little better than to oust Cruz, the fiery Republican senator who I’ve dubbed — in not-so-friendly terms — the Cruz Missile.

O’Rourke, who hails from El Paso, stopped in Amarillo over the weekend for a meet-and-greet at a local restaurant. From what I have heard, the crowd to meet him was enormous, meaning that O’Rourke’s advance team — with a lot of social media help from a group called Indivisible Amarillo — did a good job of filling the room.

But let’s not get ahead of ourselves and let’s heed a dose of sobering reality — if you’re a loyal Democrat we used to refer to in this state as “Yellow Dogs,” meaning they’d rather vote for a yellow dog than vote for a Republican.

Texas flips from D to R.

Texas is a seriously Republican state. It has flipped just in the span of a few years from being reliably Democratic. The Cruz Missile represents the colossal strength of the state GOP. He is one of a complete slate of statewide elected officials who wear the Republican label.

Cruz will be difficult to beat, so let’s not believe that just because there might be an attractive and articulate challenger from the other party that it guarantees a neck-and-neck race. Do you remember another Democrat who was thought to be a serious challenger to the GOP vise grip in Texas? Her name is Wendy Davis, the former state senator from Fort Worth. She was supposed to present a serious challenge to then-Texas Attorney General Greg Abbott in the 2014 race for governor; she lost by 20 points.

I am not crazy about one-party control at any level. I prefer a competitive two-party system. A healthy minority party puts the majority party on notice to defend its positions; a competitive environment makes incumbents accountable for the statements and the decisions they make on our behalf.

Maybe we can restore some level of competitiveness to the Texas political battleground. For the sake of those anxious Democrats around the state — and in the Texas Panhandle — I hope it’s O’Rourke who can make Cruz answer for his grandstanding and his transparent self-centeredness.