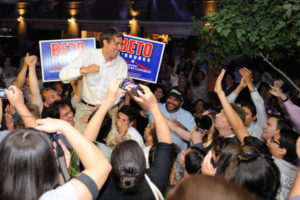 To be honest, few things political would make me happier than to see the Cruz Missile brought back to Earth by a loss to a up-and-comer such as O’Rourke.

I refer you to “Gov.” Wendy Davis, the former Democratic state senator who once was thought to have an actual chance at defeating Greg Abbott in the race for Texas governor in 2014. She lost by more than 20 percentage points.

O’Rourke represents an El Paso congressional district. He’s seen as one of the next generation of Texas Democratic stars, along with, oh, Julian and Joaquin Castro, the twins from San Antonio; Julian served as San Antonio mayor and then went to work in Barack Obama’s Cabinet as housing secretary. Joaquin serves in the House along with O’Rourke.

Cruz became a serious pain in the patoot almost immediately after being elected to the Senate in 2012. He took no time at all before inheriting the role once occupied by another Texas U.S. senator, fellow Republican Phil Gramm, of whom it used to be said that “The most dangerous place in American was between Gramm and a TV camera.” Cruz loves the limelight and he hogged it relentlessly almost from the moment he took office.

But is he vulnerable to a challenge from Beto O’Rourke? There’s no need to count the ways why I don’t think O’Rourke is going to beat him. There’s really only a single factor to consider: O’Rourke is a Democrat and Cruz is a Republican and as near as I can tell, a semi-trained monkey can get elected to damn near any office in Texas — as long as he runs as a Republican.

I say this understanding that a year from now a lot of factors can change. Will any of them turn O’Rourke from prohibitive underdog to overwhelming favorite?

Texas remains a deeply red state and is likely to remain so for, oh, the foreseeable future — if not beyond.

My most realistic hope is that Rep. O’Rourke —  if he wins his party’s U.S. Senate primary next year — makes this enough of a contest to force Sen. Cruz to think of Texans’ needs before he thinks of his own political interests.

One thought on “U.S. Sen. O’Rourke? Let’s wait and see about that one”