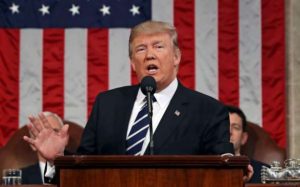 Let’s see. How many more vital U.S. allies can the president of the United States anger?

He tells Mexico that it will pay for a wall across our nations’ shared border; Mexico says “no way, dude!”

Trump calls Australian Prime Minister Malcolm Trumbull and then berates him over his country’s immigration policy before hanging up on him.

The president first accuses his immediate predecessor of wiretapping his offices and then accuses the British intelligence agency of colluding with President Obama; the Brits denied it, angrily.

Now it’s the Germans, who Trump now says have to pay more for their participation in the North Atlantic Treaty Organization.

Germany has rejected Trump’s demand. The Germans say they don’t owe a “debt” to NATO and won’t do what the U.S. president has suggested.

Meanwhile, the 45th president treats Russia with kid gloves; he calls Vladimir Putin a “strong leader” and says he wants to make nice with the Russians, who are doing all they can to make life miserable for the United States and our allies.

Who’s next for Trump? Maybe he can build a wall across our northern border to keep Americans from fleeing to Canada … and then demand the Canadians pay for it, too!