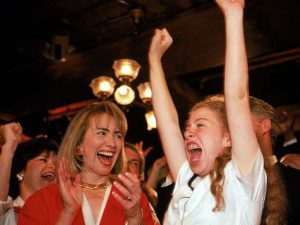 Barron Trump has joined a club that is almost as exclusive as the one his parents have joined.

He becomes one of the kids who will grow up in the White House. Thus, he has become — to the shame of many — an easy target of ridicule.

Barron doesn’t deserve such treatment any more than one of his predecessors did. And she has come to Barron’s defense. Barron? Meet Chelsea Clinton … if you haven’t met her already.

Chelsea Clinton Mezvinsky sent out a tweet over the weekend urging the public to let Barron, who’s 10 years of age, to “be a kid.” If only the Internet trolls out there would back off.

His parents, Donald and Melania Trump, have assumed the highest profile possible as president and first lady of the United States. With that responsibility, though, a lot of attention gets riveted on their son.

It’s good to see Chelsea Clinton come to the youngster’s defense. She knows better than most White House kids about the hurtful things that foes of her parents can sling — not just at them, but at her as well.

Indeed, I was privy once to a hideous comment from a local clergyman in Amarillo about Chelsea. I called him on it later in a note I wrote to him. He apologized to me several weeks later. 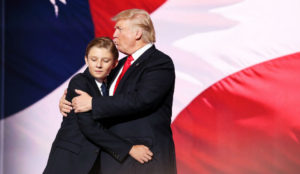 This social media craze has erupted over the past decade. Barron’s mother has made cyber bullying her main cause as first lady. Barron’s father has used Twitter to insult his opponents and assorted critics during the past year and a half. Clearly there needs to be some serious introspection within the Trump household as it relates to the use of certain social media — and as the first lady starts to ramp up her efforts to end this cyber scourge.

As for the youngster — and I won’t repeat some of the crap I’ve heard said about him — he doesn’t deserve any of the kind of abuse that’s being flung in his direction.

He is a boy, for crying out loud! As for Chelsea, she’s grown into a successful woman — who happens to be a friend of Barron’s half-sister Ivanka, who grew from a child of privilege into a woman who’s carved out her own successful life.

I now will doff my proverbial hat to Chelsea Clinton for speaking out nicely on behalf of a youngster who’s now faced with growing up under the brightest glare imaginable.