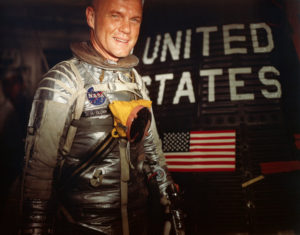 Dale Butland has written a truly depressing essay about the death of John Glenn.

Writing for the New York Times, Butland — who once worked for the one-time Ohio U.S. senator — seems to think Glenn is the “last American hero” … ever!

I wince at the thought. I shudder to think that there won’t be someone who can capture Americans’ hearts the way Glenn did in 1962.

The essay itself isn’t depressing. Its premise, though, surely is.

Do I have any clue, any idea where the next hero will appear?

However, I am going to remain the eternal optimist that we haven’t yet traipsed through the portal that takes us all into some parallel universe where no heroes can ever exist.

Sure, Glenn was an exceptional American. A Marine Corps fighter pilot who saw combat in World War II and Korea. The astronaut who became the first American to orbit the planet. A successful business executive. A close friend of John and Robert Kennedy and their families. A four-term U.S. senator. A man who got the call once again, at age 77, to fly into space aboard the space shuttle Discovery.

He became “an American legend.”

That, dear reader, is a full life.

Is he the final legendary figure ever to walk among us?

Oh, man … I pray that someone will emerge.