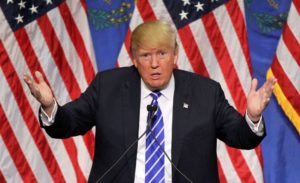 Donald J. Trump hung epithets around the necks of all his political foes while winning the presidential election.

Cruz cannot come close to matching the lies that Trump has told.

With that, I want to hereby refer to Trump as “Lyin’ Donald.”

He has put out another grand lie. It regards the election results.

Without an ounce, a scintilla, a tiny grain of evidence, Trump now asserts that “millions of votes were cast illegally” for Hillary Rodham Clinton on Election Day.

They’re recounting ballots in Wisconsin. They might do the same in Michigan and Pennsylvania. Lyin’ Donald won all three states. Green Party presidential candidate wants the votes recounted to ensure that the original count was done with integrity and honesty.

For Lyin’ Donald to suggest, though, that millions of votes were cast illegally only validates the assertion that many have made about the president-elect. He has no shame, no sense of propriety … but he’s loaded with gall.