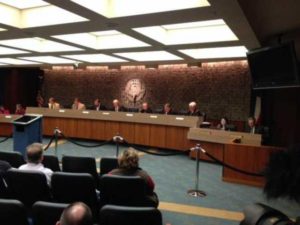 Lubbock’s municipal management leadership team is whole again, while Amarillo’s team has taken a header into the crapper.

Jarrett Atkinson — the former Amarillo city manager — is taking the helm as Lubbock city manager. The Lubbock City Council voted unanimously Thursday night to offer Atkinson the job. He’ll take it and he’ll then bring his substantial expertise on city issues — notably water management and development — to his new job.

Amarillo’s municipal future is decidedly less rosy at the moment.

Its interim city manager, Terry Childers, has quit after mouthing off into a “hot mic” about a constituent, calling him a “stupid son of a b****.” It’s only the latest intemperate remark that Childers has delivered during the year he served as interim manager, a post he took after Atkinson was forced to quit the top job at Amarillo City Hall.

To worsen matters, the Amarillo Globe-News took a decidedly unprofessional approach to chastising Childers by publishing a two-word “editorial” on its Opinion page. “Goodbye Terry” the paper blared on the page in gigantic type. That’s it. Nothing else.

Childers clearly needed to be taken to the woodshed, but it should have occurred in the form of a studied, well-researched and stern editorial commentary.

I would laugh out loud at the paper’s ridiculously chickens*** approach, except that it saddens and disgusts me that the paper’s publisher has taken his personal feud with Childers onto the page in such a manner.

What cannot yet be determined is whether such stupidity has inflicted a mortal wound on the city’s effort to lure a top-tier administrator to become its next city manager.

Childers’ exit in this manner all by itself quite likely could be enough to dissuade such applicants from wanting anything to do with Amarillo’s dysfunctional governance. I’m still shaking my head over what the newspaper has done to potentially worsen matters.

Congratulations belong to Jarrett Atkinson and his new employers in Lubbock. Amarillo, meanwhile, deserves wishes of good luck as it staggers back to its feet in the wake of its latest embarrassment.