Take a look at this page. It’s today’s Opinion page from the Amarillo Globe-News, the newspaper where I worked for nearly 18 years.

What you see here is the product of a personal feud between the newspaper’s publisher, Lester Simpson and Amarillo’s now-former interim city manager, Terry Childers. 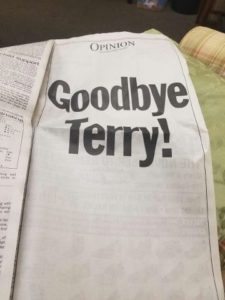 Words damn near fail me as I ponder what the publisher has done under the name of the organization he has overseen since the summer of 2002.

Childers quit his municipal post this week after muttering a profane epithet at a constituent during an Amarillo City Council meeting.

This is the response today from the newspaper of record. Did the city manager deserve criticism for his own brand of  unprofessional behavior? Of course he did. The newspaper should have delivered it in the form of an editorial explaining why the manager was out of line. But no-o-o-o. The paper delivered this instead.

A few words come to mind: petulant, unprofessional, bullying, petty, shameful, reprehensible, disgusting. Pick one. Pick more if you like. Pick ’em all. Add some more if you choose.

Rarely during the nearly four decades I worked in daily print journalism have I seen such a display from an organization that is charged with being the voice of reason in a community.

Some longtime Amarillo and Texas Panhandle residents will have looked at this page this morning and have been reminded of another such display.

It occurred in the late 1980s when the former Amarillo resident and oil/natural gas tycoon T. Boone Pickens got into a beef with the newspaper over its coverage of local issues and — namely — Pickens himself. Pickens launched a boycott against the Globe-News. He then persuaded the paper’s corporate ownership, Morris Communications, to “reassign” the then-publisher, Jerry Huff.

On Huff’s last day as publisher, one could see a banner hanging from the side of what was known as the Mesa Building. It read: “Goodbye Jerry.”

That, ladies and gents, is the model of decorum that the current publisher of the newspaper demonstrated today with that ridiculous and childish message.

Simpson and Childers have been feuding for nearly the entire time that Childers took over as interim manager. I am not privy to the root of their mutual displeasure. Simpson reportedly disliked the way Childers handled downtown redevelopment. The disagreement likely turned into something much more heated with the forced resignation of Melissa Dailey, former head of Downtown Amarillo Inc., with whom Simpson had worked on downtown issues.

Suffice to say, though, that this example demonstrates how low one can go when disputing matters of public policy.

There’s intelligent, reasoned disagreement. Then there is this.

This thought comes to mind. Given that the Globe-News endorsed Donald J. Trump for president, perhaps the publisher of the paper can seek a job in the Trump administration.

He’d fit right in with the bully in chief.

4 thoughts on “You have unprofessional, petulant, petty … and then you have this”