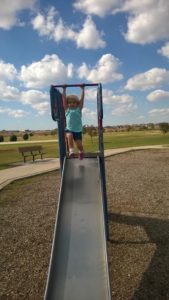 This is the latest in an occasional series of blog posts commenting on upcoming retirement.

Take a look at this little girl. Her name is Emma. She is our 3-year-old granddaughter. She makes our hearts sing.

Emma accompanied her father, the younger of our two sons, to Amarillo this weekend. She spent plenty of time playing with Grandma.

We are preparing to commence to get ready for the next big chapter in our life. It involves a big change for us. We’re going to relocate from Amarillo to somewhere near where this little girl lives with her parents and her two brothers.

That event will occur about the time I declare myself to be retired fully from the working world. I’m not there just yet.

My myriad part-time jobs have been winnowed down to just two. I like it that way.

Some time back I reported to you on this blog that my wife and I have made the emotional commitment to move.

Now, before we start getting the bum’s rush to scram from the High Plains, I want to stipulate that our move isn’t going to happen any time soon. That is, we aren’t yet ready to sell the home we built 20-plus years ago. We’ll get there … eventually.

We hope it will be sooner rather than later.

You see, our attachment to this little girl is getting stronger each time we see her, which we admit isn’t nearly as often as we would like.

I realized something about myself in 1984 when we moved from the Pacific Northwest to the Texas Gulf Coast to open another major chapter in our life story: It was that I am far more adaptable than I thought I would be. We made the move and we settled in nicely in Beaumont. Our sons came of age, grew up, went off to pursue their higher education and they have become fine men.

We went through a lesser — but still significant — change when we moved from Beaumont to Amarillo more than two decades ago. Again, we adapted easily to our new life on the High Plains.

My adaptability went through another stern test four years ago when my daily print journalism career came to a sudden conclusion.

But hey, no worries. The shock of that event wore off quickly, I should add. We’ve enjoyed ourselves immensely ever since.

Well, the next big chapter awaits. It involves the little girl in the picture.

Retirement will be a very good thing.