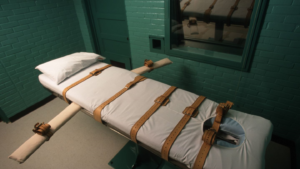 Well, OK, maybe not all Texans. A lot of us do, though.

One area of particular pride has been in the number and rate of executions carried out on those convicted of capital crimes.

For the record, that notion makes me decidedly not proud of Texas.

Get a load of this: The state has gone 148 days without executing someone. That’s almost a record. Is this where I can cheer?

Pablo Vasquez was the most recent inmate to be executed. Despite the hiatus that has gone through the entire summer, though, Texas remains the hands-down leader among the states in executing capital criminals. We put ’em down more than the next top six states combined.

There’s even a joke about how the Texas death chamber in Livingston has an “express lane.”

This is not a source of pride for me.

I declared a couple of years ago that I oppose capital punishment. My opposition surely has been tested over the years. When I read about the nature of some of the crimes committed, I admit to feeling a twinge that tells me, “That guy needed killin’.”

Then I remember what I’ve known all along. Capital punishment does not deter the commission of capital crimes. People still murder other people knowing they face the ultimate consequence if they are convicted of the crime for which they are accused.

Yes, I also have heard the rejoinder: But that guy, the one they executed, isn’t going to kill anyone any longer. Therefore, it does deter murder.

It’s an argument with no end. I’ll just revert to the empirical data that show how capital crimes take place with the perpetrator knowing full well the consequences of that action.

And then you have the issue that arises from time to time about people convicted wrongly and how the state — I’ll admit it’s rare — has killed innocent people. I believe one such case is too many.

The Texas Court of Criminal Appeals has halted several executions this year, which surprises some of us who have watched the CCA routinely deny defendants’ pleas for clemency.

I’m not hopeful that the slowdown in the rate of executions portends a potential end to the practice in Texas. I’ll accept this hiatus and hope it lasts a good while longer.

It’s not likely Texas’s execution rate will be overtaken any time soon by another state. I wouldn’t mind one bit ceding this dubious No. 1 distinction.

One thought on “Texas is shedding its ‘express lane’ execution process?”