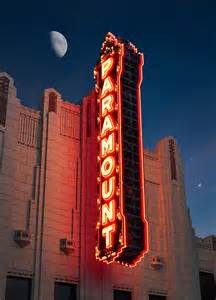 A friend of mine made a social media observation this morning I want to share here.

Wes Reeves of Amarillo is a big-time preservationist. He loves to save old buildings and to see old structures brought back to life. He’s a former colleague and we’ve been friends during the 21-plus years I’ve lived in Amarillo.

He notes that 10 years ago, Amarillo’s Center City flipped the switch on a sign in front of the Paramount Building on Polk Street in downtown Amarillo. The sign lit up, the crowd gathered in the street cheered mightily; I was one of them doing the cheering.

Reeves writes: “We hoped it would become a symbol for downtown rebirth, and it has. Since that time, tens of millions of dollars have been invested in downtown. And this sign has been photographed thousands of times by locals and visitors alike.”

He poses an interesting theory as to whether a singular symbolic act could have such a tangible economic impact. It might be pure coincidence that the lighting of the sign — which formerly lit up the entrance to a downtown movie theater — could have played a direct role in the progress that has occurred downtown.

The city did have a Strategic Action Plan in the works when Center City lit the sign. Movement was beginning.

Potter County had renovated the Santa Fe Building one block over and installed government offices into the beautiful structure.

As Reeves noted, too, “tens of millions of dollars” in private investment has been spent downtown since the sign started blazing brightly on Polk Street.

The sign was lit. The city has come a long way in the decade since in its effort to revive its downtown district. It still has a ways to go.

I’m believing that all those cheers were worth it that night when they flipped the switch on the Paramount sign.

2 thoughts on “Could a single sign be the catalyst?”