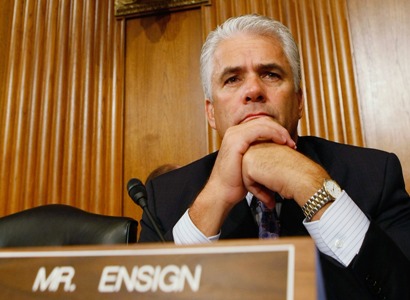 Sen. John Ensign, Republican of Nevada, said this week that former President Clinton’s affair a decade ago with a White House intern was different from his own transgression in this regard: The president broke the law, Ensign did not.
I get that, senator.
The GOP-led House impeached Clinton, the Democratic president, ostensibly because he lied under oath to a federal grand jury on whether he had “sexual relations” with Monica Lewinsky. That, according to the House, was an impeachable offense. So, the House acted.
Ensign, however, merely had sex with someone other than his wife. He admitted to it, and has thrown himself at the mercy of his wife and the people of Nevada.
I get that, too.
But here’s a flash: Sen. Ensign has advertised himself as a devout Christian, a Boy Scout, a man of impeccable moral rectitude. Moreover, he was brutally critical of Clinton during his impeachment by the House and his trial in the Senate.
When one portrays himself as a paragon of virtue, then he’d better live up to his own pious words.
Ensign hasn’t done that. He’s talked the talk, but surely has stubbed his toe while walking down a perilous path.
Tweet