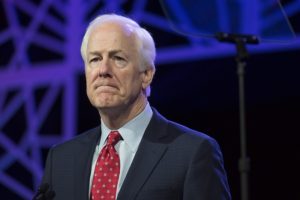 John Cornyn is angry about the deaths of those five Dallas police officers.

So am I. So are millions of other Americans.

Is that reason enough to create a new federal law, as Sen. Cornyn, is proposing? No. The states have it covered.

My hunch is that Cornyn’s bill is meant to toughen penalties in states that do not now impose the death penalty for any capital crime.

I understand Cornyn’s interest in this issue. He’s a former Bexar County trial judge and a former Texas attorney general.

Texas, though, already makes killing cops an automatic death penalty prosecution, as do most states in the country.

According to the Texas Tribune: “Law enforcement officers selflessly put their lives on the line every day to protect our communities, and in return they deserve our unparalleled support for the irreplaceable role they serve,” Cornyn said in a statement. “The Back the Blue Act sends a clear message that our criminal justice system simply will not tolerate those who viciously and deliberately target our law enforcement. As our country continues to grieve following last week’s tragedy in Dallas, we must come together in support of those who risk everything to keep us safe.”

My goodness, we can support our officers in many tangible ways. Texas already has enacted strict punishment for those convicted of killing officers.

Cities can support their police departments by ensuring they have adequate resources, staffing, up-to-date equipment and training. Legislatures can buttress local governments with sufficient grant funds that they can funnel to communities to assist in providing the best law enforcement that money can buy.

Millions of Americans are justifiably outraged over the attack that occurred in Dallas. Do we need another federal law that proves how mad we are? No.