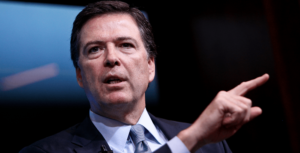 It’s usually pretty hysterical. Take the announcement today that the FBI will not seek an indictment of former Secretary of State Hillary Clinton over her use of a personal e-mail server while she was in that highly sensitive public office.

FBI Director James Comey said Clinton was “extremely careless” in her use of the server; he said she did plenty of things wrong, but nothing on which he could seek criminal charges.

It has given social media users all over the nation reason to extol the Democratic presidential candidate’s “guilt” over a variety of transgressions.

They’re saying she “lied,” that she’s “corrupt,” that Comey and the feds were “bought off by Clinton money,” that the Clintons’ privileged status among the political elite bought her leniency that others would have received.

None of that, of course, has been proved. The accusers will say, “Who needs proof? I just know it’s all true!” It all rests in the hearts and minds of those who are disposed to, well, hate the former secretary of state.

What about the rest of us? Folks such as, oh, yours truly?

I’m going to take Comey at his word that his career prosecutors — the individuals who are not political appointees — came up empty in their search for criminal culpability. To my way of thinking, when investigators cannot offer proof to merit a charge of wrongdoing, then that’s the end of the criminal aspect of this on-going controversy.

Clinton will have to call a press conference and face the music publicly about the things Comey said about how she conducted herself while leading the State Department.

I know those media confrontations make Clinton uncomfortable. Indeed, one gets the sense she detests reporters generally, although no one has ever asked her directly, in public, for the record about what she thinks of the media.

I also am aware that no matter how forthcoming she is that it won’t quell the critics. They’ll continue to find holes in her public statements; why, they’ll even create holes in them just to foster their own arguments against her presidential candidacy.

We live in the social media age. For better or worse, Americans are forming a lot of their opinions about public figures based on 140-character messages sent out on Twitter, or on messages posted on Facebook or other social media platforms.

Hillary Clinton has known this about our world and I trust she understood it when she decided to seek the nation’s highest office.

It’s tough out there, Mme. Secretary. Deal with it.