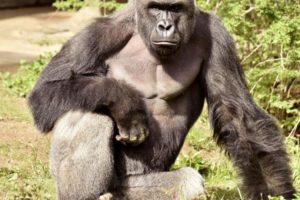 Harambe’s death in the Cincinnati Zoo has sparked outrage around the world.

Yes, it’s tragic. It shouldn’t have happened. It took no time at all for recriminations to start flying over the death of the rare gorilla that well could have killed a little boy who had fallen into the beast’s enclosure.

Zoo officials did what they had to do. They shot Harambe to death to save the boy from potentially serious injury or death.

Who’s to blame? Who’s at fault? Who should pay for this?

I will say here that the parents shouldn’t have to face criminal charges, nor civil penalty.

Yes, they erred in taking their eyes of the tot long enough for him to climb through the barrier and fall into Harambe’s enclosure. Let’s not “go after” them for a mistake.

Zoo officials say this is the first time in the venue’s history that this kind of event has occurred. It likely will be the last time — for a very long while.

Does the Cincy Zoo need to do a better job of securing these enclosures from incursions made by curious children? Obviously, the answer is a resounding “yes!”

Harambe was a 400-pound beast capable of doing horrific harm to the little intruder. Frankly, I’m amazed that the boy wasn’t hurt, given the way Harambe was tossing him around and dragging him through the water.

Let us stop the recriminations and look now for solutions to prevent this from happening ever again.