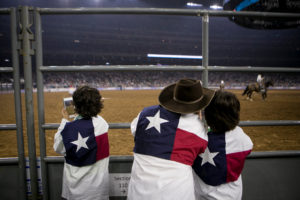 Manny Fernandez has written a fascinating essay for the New York Times about Texas.

He seems to like living here. Indeed, he is not alone in being attracted to Texas, as the state’s population is growing rapidly. We aren’t likely to catch California any time soon, but the number of Texans is now approaching 30 million.

As I read it Sunday, though, I was struck by something left out.

Fernandez talks extensively about how some Texans take their Texanhood so very seriously, even to the point of putting Texas soil under the bassinet of a newborn baby to ensure the baby’s Texas roots.

He didn’t mention how an anti-littering slogan coined in the 1980s has been morphed into a kind of macho mantra.

We can thank then-Land Commissioner Garry Mauro, on whose watch the slogan came to life.

Since then the slogan has come to mean something quite different in many people’s eyes. It’s come to mean that you don’t “mess with” the state at any level. Don’t disrespect us. Don’t insult us. Don’t make fun of us.

Don’t do this or that … or else we Texans will make you pay for it.

I have no particular problem with the Don’t Mess With Texas slogan as long as it is being used for its intended purpose, which is to admonish litterers to avoid tossing their empty beer cans or their used-up containers of Skoal onto our highways.

I wonder, though, if the Land Office ever envisioned it being perverted in the manner that it has over the years.

It’s also become, in addition to a kind of battle cry for Texans, grist for those who seek to belittle the state.

Sure, Texas is a special place. We’ve lived here for 32 years. We call it home — even if the right-wing politics here at times makes me a squirm just a little.

I encourage you to read the New York Times link. It spoke clearly to me as a Texas transplant who has learned about the state’s peculiar obsession with itself.