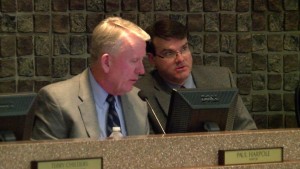 Just when some of us had hoped the Amarillo City Council’s five-man lineup might learn to cooperate among themselves, we see an exhibition of non-cooperation.

Let’s see how this goes.

The council was going to consider two appointments to the Amarillo Economic Development Corporation, the city’s publicly funded development arm. The debate got a bit rowdy, as I understand it.

Two council members, Mayor Paul Harpole and Councilman Brian Eades, objected to the appointments being considered. The other three supported them.

Then came a motion from one of the other three, Councilman Randy Burkett, to shut down the public meeting and vote without any further public discussion.

Then the council voted 3-2 to seat the two new members — Craig Gualtiere and Brian Heinrich.

I’m not going to comment — at least not today — on the individuals who’ve been seated. I know one of them pretty well. I consider him a friend.

What does trouble me are two aspects of this selection process: the effort to shut down the public discussion and the division that splits the three newest members of the council from the two more experienced hands.

Burkett, Mark Nair and Elisha Demerson all were elected to bring change, openness and transparency to the council. Their actions this week in shutting down the discussion speaks to other instincts that look a lot like what they accused the former council of doing.

As for the division that laid itself wide open this week, that will need to be dealt with as the council moves forward on a number of citywide projects and policy decisions. I don’t mind tension among governing officials if it leads to constructive conclusions.

My hope here is that the division that erupted over the AEDC selection doesn’t stymie the work of the economic development agency, which in my view has done well for the city since voters approved its creation in 1989.

As for shutting out the public’s views on who should serve, let us also remember: The AEDC parcels out public money collected from a portion of the sales tax revenue contributed by, um, the public.

That is our business being conducted. The public has every right to have a say in determining who is making these decisions.