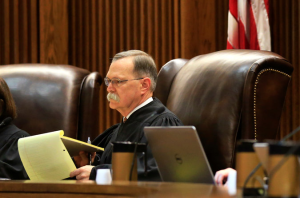 It can be declared categorically — perhaps it should have been long ago — that the judicial branch of government is as political as the executive and the legislative branches.

The U.S. Senate is playing politics with President Obama’s selection of Merrick Garland to the Supreme Court.

Now there’s this, in Kansas.

The state legislature is considering a bill that would call for the impeachment of state supreme court justices if they seek to “usurp” the power of the legislature or the governor.

In other words, if the state’s highest court rules differently from what the legislature or the governor believes, the justices are subject to being kicked off the bench.

What an extraordinary — and ham-handed — approach to governing.

Kansas judges are appointed and then are subject to retention elections during their tenure on the bench. Conservative activists and politicians want voters to reshape the court by kicking four justices out who they believe have ruled the wrong way on key issues. Therefore, voters have the power already to decide which justices should stay and which ones should go.

The Republican-controlled Kansas legislature is hoping voters this fall will tilt the court more toward the majority of lawmakers’ liking. So, why seek to enact this measure that liberalizes impeachment proceedings against the state’s judicial branch?

As the New York Times reported: “Gov. Sam Brownback and other conservative Republicans have expressed outrage over State Supreme Court decisions that overturned death penalty verdicts, blocked anti-abortion laws and hampered Mr. Brownback’s efforts to slash taxes and spending, and they are seeking to reshape a body they call unaccountable to the right-tilting public.”

It’s no longer left to the state’s highest judicial authority to interpret the state’s constitution as it sees fit. It now has an extra layer of oversight coming from the legislative and executive branches to ensure that the court rules “correctly.”

This is political conservatism? It sounds and looks much more like activism in the extreme.

One thought on “Judiciary is non-political, right? Uh, no”