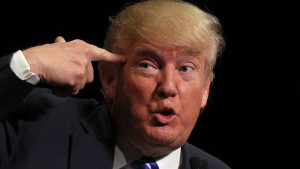 Peter Wehner doesn’t strike me as a wacked-out Republican loon.

He writes pretty well, if the essay in today’s New York Times is an indication.

The man is frightened at the prospect of Donald J. Trump becoming his party’s next presidential nominee. And he expresses that fear — right along with a lot of other Republican wise men and women — with profound eloquence.

Check out his essay here.

He says the Founders were afraid of people such as Trump. They feared strongmen rising to the top of the political heap. As he says in his NYT essay:

“The founders, knowing history and human nature, took great care to devise a system that would prevent demagogues and those with authoritarian tendencies from rising up in America. That system has been extraordinarily successful. We have never before faced the prospect of a political strongman becoming president.

I’ve been reading and listening to a lot of commentary in recent weeks about the Republican strategies being devised to deny Trump the party nomination. And as I take it all in I remind myself of things Trump said earlier in this campaign about how he would respond if he’s treated badly at the GOP convention this summer.

He’s suggested, then recanted, and then suggested again that he might launch an independent bid for president if Republicans aren’t nice to him. He wants to be treated “fairly,” he has said.

If I were advising Trump, I’d be examining all these efforts to wrest the nomination from my guy and I would conclude: Hey, these guys flat-out don’t like Trump; they aren’t being nice, fair, even-handed … none of it.

If Trump is true to his word, that he wants fair treatment and would resort to other means to win the White House if he’s mistreated by his party moguls, then my strong hunch is that he might be cooking some plans to strike back at those Republican honchos.

After all, he’s already exhibited a serious mean streak all along the campaign trail so far.

Does anyone really think this fellow is incapable of creating maximum chaos?

And if you do believe he never in a million years would do anything to stick it in the GOP’s eye, check this out.