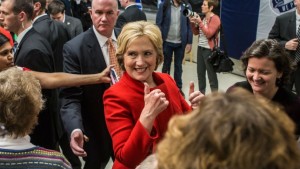 The Associated Press has declared Hillary Clinton the winner of the Iowa Democratic caucus.

Now she can declare victory, which she did — albeit a bit prematurely — Monday night.

It’s a victory without much actual meaning, though, if you think much about it.

The former first lady/U.S. senator/secretary of state once held a commanding lead over U.S. Sen. Bernie Sanders in Iowa. Then it vanished. Sanders began gaining traction with his progressive/populist message. He had those big crowds, remember?

So it ended Monday night with Sanders trailing Clinton by two-tenths of a percentage point. She won about four more state delegates than Sanders.

Yes, she won. Will it matter in New Hampshire, or in South Carolina or anywhere else? Probably not.

I am one of those who thought Clinton would be unstoppable. The Democrats would nominate her by acclamation at their Philly convention and she’d breeze to election in November, making history as the nation’s first female president.

She still might be impossible to stop. She’s got a party machine behind her. And, oh yes, she’s got her husband, the 42nd president, also campaigning for her.

Say what you will about former President Clinton, he remains to this very day the nation’s most formidable political figure.

However, this campaign is going to be a lot tougher than Hillary Clinton ever imagined.

Her victory was hard-earned. Then again, she wasn’t supposed to work this hard to get it.