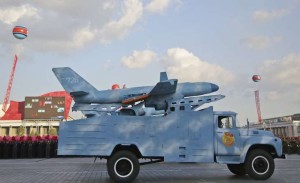 There might not a more untrustworthy nation on Planet Earth than the one that occupies the northern part of the Korean Peninsula.

North Korea says it will end its nuclear testing if two things happen: it gets a peace treaty with South Korea, and the South Koreans and the United States end their joint military exercises.

Well, that won’t happen. Nor should it, not without a bucket load of assurance from North Korea that it not only would end its nuclear testing, but that it would dispose of the nukes it has in its arsenal.

How does that occur when we’re dealing with someone as unpredictable, vain and utterly contemptible as Kim Jong Un, the guy who runs the world’s most secretive nation?

Kim Jong Un kills those who disagree with him. The people who live in his country are starving to death and yet he continues to pour money that North Korea doesn’t have into a nuclear arms program. He blusters about going to war with the United States of America.

North Korea has long wanted a peace treaty with South Korea. The Korean War, you’ll recall, ended in 1953 with a mere cease-fire. The two sides never formalized the end of the war that cost about 50,000 American lives. It was a brutal conflict involving many nations that came to South Korea’s defense after the Marxist North Koreans invaded the south in 1950.

China joined the fight and fought head-to-head with Americans on some of the most barren and desolate battlefields of the 20th century.

However, more than 60 years after most of the shooting stopped, the two nations — South and North Korea — remain technically “at war.”

Do we  relent and sign that treaty and pull back our military preparedness in South Korea? Not a chance.

If the North Koreans really mean what they say about ending their nuclear testing program, they need to go a lot farther than merely saying they’ll stop exploding nukes. Their record is replete with examples of how their words cannot be trusted.