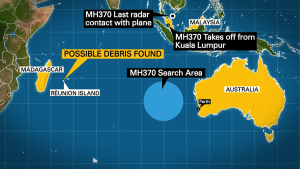 I don’t know whether to laugh or scream at this news.

An Australian search vessel looking for Malaysian Airlines Flight 370 has discovered some wreckage at the bottom of the Indian Ocean.

Is it the plane? Is it any aircraft? Oh, no. It’s now been determined that the debris is from an early 1800s shipwreck.

What about MH 370, which vanished on March 8, 2014 after taking off from Kuala Lumpur en route to Beijing? It’s still gone. Not a trace of it has been found anywhere. Satellite technology, state-of-the-art underwater vessels, shipboard sonar and radar all have failed.

A Boeing 777 with more than 200 individuals on board has vaporized.

Truth be told I’m not altogether sure why I’m even commenting on this item.

The direct descendants of those who were lost on the ship are long gone.

As for those who are waiting for word about the missing jetliner . . . well, they’re still in great pain.