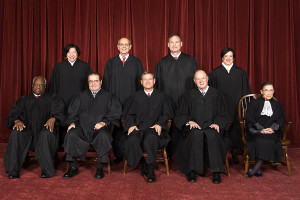 I saw a news clip last night that, frankly, stunned me.

I’d seen it before, but had forgotten how ill-informed the person featured in it seemed to be when he made a particular statement.

He’s running for the Republican nomination of president of the United States.

But when the Supreme Court voted 5-4 this past year to legalize gay marriage throughout the country, Cruz said it was wrong for “five unelected lawyers” make such profound decisions. He sought to make the case, it appears to me, that the federal judicial system — as established by the founders of this country — was fatally flawed.

I do not intend to lecture this bright young lawyer about the Constitution, but I do want to make this point.

The nation’s government framework gives the Supreme Court enormous power. That’s why making appointments to that court is arguably the most important decision a president ever makes during his time in office. Cruz knows that . . . I’m sure.

When the court rules on the constitutionality of issues, its word is final. That’s how the framers set it up. They entrusted the highest court in the land to make these decisions without qualification. Yes, some of these decisions have been reversed over time. By and large they’ve been overturned with good reason.

However, one shouldn’t trivialize these court rulings as being the mere opinions of “five unelected lawyers.” They’ve been given a huge responsibility by the very government for which Sen. Cruz, himself, works as a legislator.

The court has made decisions over the years with which I disagree. However, I honor and accept those decisions as part of the constitutional process.

At least, though, the nation’s Supreme Court comprises nine lawyers, individuals who’ve studied the law and know it pretty well. The founders didn’t require justices on that court to be lawyers in the first place.

I trust Sen. Cruz knows that to be the case as well.