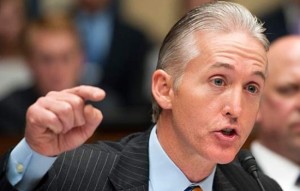 Trey Gowdy has endorsed Marco Rubio for president of the United States.

Not a big deal, you say?

Gowdy is chairman of the House Select Benghazi Committee. He keeps saying he isn’t driven by political motives, seeking to harm former Secretary of State Hillary Clinton’s quest to become the next president. Clinton, of course, ran the State Department when the terrorists stormed the U.S. consulate in Benghazi, Libya on Sept. 11, 2012.

But wait. Rubio is seeking the Republican presidential nomination. Gowdy’s also a Republican. Clinton is a Democrat.

Is Gowdy motivated by politics? Democrats are asking that question in the wake of Gowdy’s endorsement of his buddy Rubio.

I think it’s fair to ask why Gowdy chose to endorse a Republican candidate so early in the nominating process.

It’s also fair to wonder whether the chairman has developed a political tin ear to how this kind of endorsement might look to those who have been wondering all along whether the Benghazi hearings were tainted by more than just a touch with politics.

All those congressional hearings and the many hours of testimony have failed to prove a coverup by Clinton, as has been alleged by Republicans … including, by the way, Sen. Marco Rubio, Chairman Gowdy’s preferred choice for president of the United States.