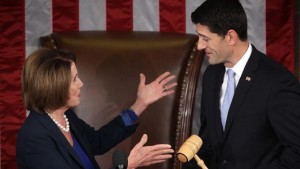 A single dinner involving two political leaders of opposing parties likely doesn’t signal much all by itself.

Newly elected House Speaker Paul Ryan, R-Wis., invited House Minority Leader Nancy Pelosi, D-Calif., to his Capitol Hill office for a two-hour get-together. They had a meal in the office and talked a little shop and got to know each other a little better.

What does this mean?

It might be a precursor to some actual progress in Congress between political leaders who’ve been fighting each other — often using some intemperate language to describe the other sides’ motives and intentions.

Democrats and Republicans are battling at the moment over a new budget. They did manage to cobble together a five-day stopgap measure that keeps the government running … but only for a short time. More bargaining is due in the next few days for everyone to agree on a $1.1 trillion federal budget that funds the government through most of next year.

Ryan and Pelosi reportedly don’t know each other well. This meal in Ryan’s office was billed as sort of an ice-breaker.

Where do we go from here? That remains anyone’s guess.

Congress, though, needs to figure out a way to assert its constitutional responsibility to actually govern. There’s been too much fighting between the parties, not to mention between the majority party — that would be the Republicans — and the White House.

The president must share responsibility in this ongoing inability to find common ground. However, just as members of Congress want to take credit for the good things that happen, they also need to take responsibility for the negative occurrences.

Ryan and Pelosi likely aren’t going to become best friends forever — aka BFFs. A dinner, though, well might set the stage for a new working relationship that restores the concept of good government to Capitol Hill.