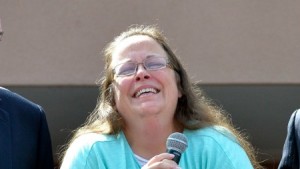 The question loomed: Would she do her taxpayer-funded job, which includes issuing marriage licenses to same-sex couples?

Well, no, but actually yes.

Davis, the rogue county clerk who spent a few days in the slammer when a federal judge found her in contempt of court for railing to issue the licenses, said she wouldn’t do issue the licenses herself, but wouldn’t stand in the way of her deputy clerks who chose to do their jobs on her behalf.

You know, that sounds like a reasonable compromise to me.

If only, though, Davis would understand a couple of key points in this ridiculous sideshow.

One is that her religious faith isn’t being challenged. Two is that she took an oath to serve the entire public, and that includes gay citizens who, according to the nation’s highest court, are entitled to the same rights as all U.S. citizens.

If she can’t perform all the duties she took an oath to perform, she ought to quit.