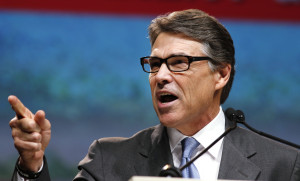 OK, it doesn’t sound much different from 17, which was the number of Republicans seeking to become president of the United States.

Today, though, former Texas Gov. Rick Perry “suspended” his campaign. He’s out of money, out of staff, out of momentum.

“When I gave my life to Christ, I said ‘your ways are greater than my ways, your will superior to mine,’” Perry said in a speech in Missouri. “Today I submit that His will remains a mystery, but some things have become clear. That is why today I am suspending my campaign for the presidency of the United States.”

It wasn’t supposed to be this way for the one-time Texas political juggernaut. He said he’d learned his lessons from his short-lived and disastrous 2012 GOP primary campaign. He just didn’t figure out how to cope with all the other who outflanked him on the right — which is tough to do, given Gov. Perry’s own conservative credentials.

But they did. And, of course, a guy named Trump has sucked all the air out of the proverbial room.

You probably think I’m crying crocodile tears over Perry’s departure. OK, maybe a tear or two are of croc variety. But I am disappointed he didn’t do better this time out.

I believe in redemption and I hoped Perry could redeem himself from that hideous “oops” moment four years ago.

It isn’t meant to be.

As for his “suspending” a campaign, I wish political flacks could come up with another word for it. To “suspend” something connotes a temporary condition.

Hey, here’s another way he could have said it: I quit.