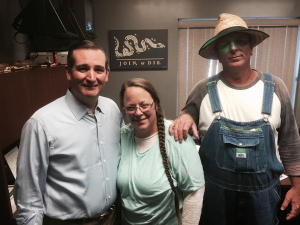 I found this picture a few minutes ago on the Houston Chronicle website … and I’ll concur with the comment accompanying it that this likely is the most “epic” photo op ever taken of U.S. Sen. Ted Cruz, R-Texas.

That’s the junior Republican senator — and presidential candidate — on the left; next to him is Kim Davis, the Rowan County, Ky., clerk who was jailed for refusing to issue marriage licenses — and who was ordered released from jail earlier today; and next to her is her husband, to whom she’s been married twice.

Check out the “Live Free or Die” poster on the wall behind them.

I guess the big man’s bibs are part of his regular attire.

As for Cruz, who’s decided to make some political hay over Davis’s refusal to do the job to which she took an oath, I keep thinking how he would respond if a pacifist county clerk — who also could stand behind his or her religious belief — refused to issue a gun permit.

Anyhow, I agree with the view that this picture is worth a million — not just a thousand — words.