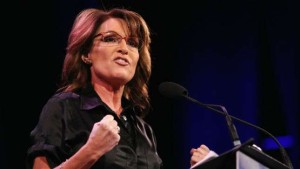 Palin, known as “Denali” back when she ran for VP on the 2008 GOP ticket led by John McCain, chided and jabbed at the president, I guess, for coming to Alaska to announce changing the name of Mount McKinley to its ancient native Alaskan name, Denali, which was the Secret Service code name assigned to her when she ran with McCain against Obama and Joe Biden.

There’s just no pleasing some folks.

OK, Palin and the president disagree on the effects of climate change, which Obama also wanted to highlight on his trip way up north. She wrote an essay in which she invited him to see a glacier that, according to Palin, is actually growing.

She also encouraged him to visit military personnel stationed in Alaska.

That’s all fine and dandy.

My own wish would be for Sarah Barracuda to stick to matters she knows best. Like reality TV.

I mean, come on. Barack Obama was the first sitting president in U.S. history to venture north of the Arctic Circle. That’s got to be worth at least a little bit of a shout-out.