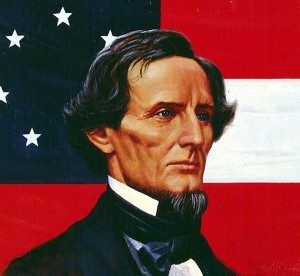 Weep not for the removal from the University of Texas-Austin grounds of a statue.

It is of Confederate President Jefferson Davis.

The statue removal has been the subject of considerable angst at the campus. In the end, a judge said the statue could be removed.  So today it was taken down, wrapped up, put on a truck and will be taken to the Dolph Briscoe Center for American History.

It need not be shown in a public place where everyone — including those who could be offended by a statue depicting someone who led the secessionist movement in the 19th century.

It’s one more action taken in the wake of that monstrous shooting in Charleston, S.C., of nine African-Americans by someone who allegedly declared his intention to start a race war. A young man has been charged with the crime and this young man is known to have racist views and has been pictured with symbols of the Confederacy.

Do you get why the Jefferson Davis statue might be highly offensive, say, to many of the students and faculty members at UT-Austin?

According to the Texas Tribune: “UT Student Body President Xavier Rotnofsky — who proposed the removal of the statue as part of his satirical campaign — said the fight is over and he is happy to see the statue being moved.

“’It’s very satisfying,’ Rotnofsky said. ‘What started off as a very far-fetched idea during the campaign — we came through with and the school year has barely started.’

“He said the national conversation after the South Carolina shooting and the passion of students on UT’s campus made the removal possible.”

Yes, Davis is a historical figure in the strictest definition of the word. He also was a traitor to the United States of America. Has anyone lately seen any statues, for instance, of Benedict Arnold?

So, put Davis’s likeness in a museum, where it can be looked at and studied by those with an interest in the Civil War.

And be sure it includes all the reasons that Davis and the Confederacy went to war against the Union in the first place.