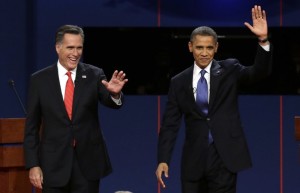 I’ve noted before in previous election cycles that the major political parties need to think beyond the norm when planning for debates between their presidential nominees.

The norm in the past has been to select cities with large media markets. Sometimes the parties put these debates in cities and states where the race is competitive.

Here’s a revolutionary thought: Why not stage one of these events right here, in little ol’ Amarillo, Texas?

Hey, I know it’s a long shot. A pipe dream. I know it won’t happen. Then again, in this strange, goofy, unpredictable, topsy-turvy primary campaign — which on the Republican side is being driven by Donald J. Trump — well, anything seems possible.

Look at it this way, Amarillo is a significant city in a significant state. One of Amarillo’s state lawmakers, Republican Four Price, said the other day that Texas’s economy all by itself is the 12th largest in the world. That by itself makes us a player.

What might be the theme of a debate held in Amarillo? Energy policy ought to be front and center. I doubt, of course, that debate planners would build a two-hour televised event around energy policy by itself.

But it does tie into the nation’s economy. How about foreign policy, given that we’re weaning ourselves of foreign oil? We’re becoming something of a trend-setter in the development of wind energy, one of those alternatives that gets some of the credit for the plunging oil prices around the world.

We’ve got venues for such an event. The Civic Center is one. The performing arts center across the street is another. Why not look at the West Texas A&M University event center in Canyon?

Is such a thing possible?

Consider this: No one ever thought that Donald Trump would be setting the pace in the race for the Republican Party presidential nomination.

I’m just saying that this election is wild and crazy enough for Amarillo to get a serious look if the political parties here want to put together a formal request.

One thought on “Why not debate … in Amarillo?”