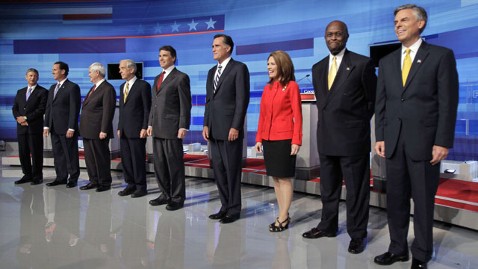 Is there a chance that the Republican Party primary joint appearance set for this week can restore some semblance of decorum?

Fox News Channel is welcoming the Top 10 GOP presidential contenders to a debate stage in Cleveland on Thursday.

I almost can see it now: The announcer will introduce each of them one at a time. They’ll walk out, wave to the cheering throngs they’ve recruited to come cheer their every word. They’ll mug and smile and act like they’ve just done the “red carpet walk” at the Oscars.

That’s more or less what occurred during the 2012 debate season. To be honest, it’s a major turnoff, just as it was in 2008 when Democrats and Republicans had the same show-biz element at their debates.

If I were King of the World, I wouldn’t even allow audiences to be present.

It would be just the journalist panel and the candidates. Ask them tough questions, force them to answer them — in detail. With no one else in the room, there’d be little opportunity for “sound bites,” no “You’re no Jack Kennedy” moment — a la the Sens. Lloyd Bentsen-Dan Quayle VP debate in 1988 — that draws hoots and hollers from the partisans.

I am a realist, though. I know that Fox and CNN — which is sponsoring the second GOP debate — are going to go for the gusto.

They want to gin up interest and I guess the best way to do that is bring as much entertainment value as possible into what should be a most serious event.

But, hey, I’ve made my pitch. So now I feel better.