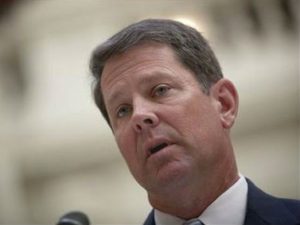 Let’s see how this works.

The Georgia secretary of state is running for governor. He also is in charge of administering the state’s election laws. This official, Brian Kemp, is locked in a tight race against an African-American woman, Stacey Abrams.

In 2017, Kemp — a Republican — ordered a “pause” on more than 50,000 voter applications, seeking to ensure they were properly identified as legitimate voters. Georgia’s voting population is about 32 percent black, but the percentage of black voters’ applications in the “paused” list is about 70 percent.

Hmm. Is there something a bit smelly here? Abrams and her fellow Democrats believe there is and they have filed a lawsuit to overturn Kemp’s order on the effort to delay the voter registration effort in Georgia.

It’s not too peachy, if you ask me.

Kemp and his supporters say other states have enacted similar rules. They contend the courts have upheld them. They call the complaint by Abrams and her allies “bogus.”

Here is how The Washington Post is reporting it.

This looks bizarre in the extreme to me.

Kemp and Abrams are locked in a tight race for governor. Kemp leads his Democratic opponent by about 2 percentage points, which makes the race a toss-up. Eliminating the 53,000 voter registration applications through some bureaucratic mumbo-jumbo could prove decisive in a close election.

That the issue also contains a racial element — in the Deep South, no less — gives this story even more standing.

My hope is that the courts settle this matter quickly, in time for the election.

Perhaps most galling is the idea that the state’s chief elections officer who happens to be running for governor to my way of thinking signifies a serious conflict of interest in the first place.

Hillary Rodham Clinton ventured into the belly of the Republican beast to, shall we say, beat the daylights out of Republicans for what she insists is a systematic effort to keep Americans from voting.

Dallas Morning News blogger Jim Mitchell called her speech at a historically black university an exercise in “cynicism.” He also thinks Clinton is correct when she ticks off the ways GOP politicians who now are running — or are about to run — for president of the United States seek to disenfranchise voters.

She wants to enact an automatic voting law that affects any U.S. citizen who turns 18. She wants to expand the early-voting window to 20 days before an election. She made both points during her talk at Texas Southern University. However, as Mitchell noted in his blog, neither plan has a chance in hell of being enacted — at least not in the near future.

I particularly liked how Clinton went after former Texas Gov. Rick Perry signed a law that a federal judge said discriminated against minority voters and how the then-governor applauded when the U.S. Supreme Court gutted the Voting Rights Act.

Yes, her speech was aimed at African-American voters — which Mitchell cited as a symbol of her cynicism. What’s the problem? That’s part of her “base,” just as the TEA party constituents are a part of the GOP base. That’s what politicians do when they run for their party’s presidential nomination: they go for their respective bases.

Clinton also took aim at the bogus allegation of widespread voter fraud, which politicians in many states have contended is occurring. Sure, a tiny number of voters cast ballots illegally. Is it a widespread epidemic, as has been described by some observers? Not even close.

We’re heading for a raucous campaign. Ten GOP politicians have declared their intention to run for president, along with four Democrats. The number of Republicans is sure to grow, perhaps by at least double the number in the race at the moment; one or two more Democrats might emerge as well.

Let’s all hold on. We’re heading for a rough ride.