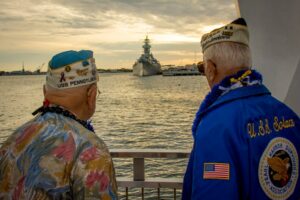 I vowed a while back to start thanking World War II veterans when I encountered them. I would do so more frequently, except that I don’t find too many of The Greatest Generation wearing gimme caps with “World War II Veteran” inscribed on the front of them.

I did so yesterday, though, while shopping for groceries here in Princeton.

I saw a gentleman pushing a shopping cart. I walked over to him, extended my hand and said, “I want to thank you, sir, for saving the world.” The nice man smiled, took my hand, returned a firm handshake and said, “Well, we did what we could.”

That’s typical of those folks, all 16 million of them who suited up for World War II after the attack on our armed forces at Pearl Harbor, Hawaii. I told the gentleman that he “damn sure did” do a lot to save the world.

I mentioned my effort to thank World War II vets in an earlier blog post, but a reader of this blog reminded me that Korean War veterans are getting long in the tooth, too. The Korean War erupted only five years after the end of World War II, so the reader is correct to remind me that I most certainly should extend the hand of gratitude to those veterans, too.

I am proud to be the son of a World War II veteran. Dad is no longer among us, but I offer these words of thanks and gratitude in his memory.

It will be a sad day, indeed, for the nation when the final World War II veteran passes from the scene. Oh, what these men and women did during that time of grave worldwide peril is the stuff of legend.