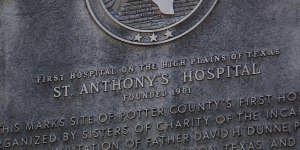 I’ve written before on this blog about my hope for the future of a site that once housed an acute-care hospital known colloquially as “Saints.”

Well, according to what I see on KFDA NewsChannel 10’s website, the Saints complex is likely to get new life as a low-income housing center for elderly residents.

That, I submit, is a perfect repurposing of the 565,000-square-foot structure.

The building has been owned by a fellow who sought developers to purchase it from him. He doesn’t live in Amarillo, but has been paying the taxes on the structure since purchasing it after the two hospitals merged some years ago.

According to KFDA’s website: “If you live in Amarillo and if you’ve been around for a while you know that this community is in need. In need of a lot. More than that, it’s in need of hope, and this has been on the drawing board for so long that people have begun to give up hope. Well, it’s in motion now Amarillo, and we’re about to put it down,” said Jay Parker, director of media relations for the North Heights Advisory Association.

It’s not a done deal. There are some hoops through which the association must jump.

From KFDA: To make housing affordable, the St. Anthony’s board has to apply for a housing tax credit program that, if granted, would cut the cost of development which would offset the price of rent.

“The low income tax credit is vital to people being able to afford the program. The program is going to be called ‘The Commons at St. Anthony’s,’ so it’s going to be a low income, housing tax credit program for elderly’s for seniors,” said Parker.

The campus on Amarillo Boulevard and Polk Street has been an eyesore for too long already. I am pulling hard for the North Heights Association to make good on the promise of delivering low-income housing for elderly residents in need. 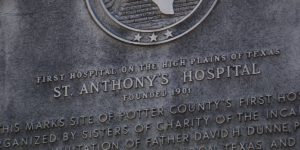 Who would have thought this was possible?

A group that took over control of a long-abandoned hospital campus has pitched the Amarillo City Council for a plan to provide about 125 low-income housing units.

The project is far from a done deal, but knowing the leader of the refurbishing effort as I do, I will not be surprised to see this dream come true.

St. Anthony’s Hospital went dark after the medical complex merged with High Plains Baptist Hospital about two decades ago. It has sat vacant along Amarillo Boulevard and Polk Street ever since. Mary Emeny, who heads a group called St. Anthony’s Legacy and Redevelopment Corporation, talked the City Council into giving its approval.

Emeny’s group has filed application for tax credits from the Texas Department of Housing and Community Affairs.

Emeny, a former Amarillo Globe-News Woman of the Year, wants to convert the campus into a housing complex that would provide about 125 units. I’ve known Mary Emeny for some time. She is a force of nature. Emeny wants construction to start in March 2020; she says it will take about a year and a half to complete.

As KFDA NewsChannel 10 reports: While the plan would be to serve elderly residents, the building will address other needs in the community. “We’re hoping we can put a day care center on the first floor. Daycare is a real need up in that area as well. Seniors and daycare is a natural fit,” said Emeny.

I took a tour of the St. Anthony’s complex a few years ago when I was working as a freelance writer for NewsChannel 10’s website. The former owner walked me through the structure. Yes, it is a mess. Vandals had damaged it. The building was not secure.

Emeny’s outfit has a big job ahead of it.

I wish them well. I also am hopeful that the St. Anthony’s redevelopment effort to revive a structure that fulfills a serious community need: affordable housing for those in dire need of it. 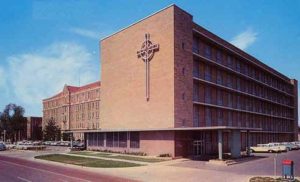 As much progress that has occurred in Amarillo, Texas, in recent years, there remains much work to do to restore, revive and rejuvenate historic landmarks.

To that end, a former hospital campus on Amarillo Boulevard and Polk Street just might become the next big triumph in the city’s long-term redevelopment strategy.

Or … it might not. I will hope for the best.

A newly formed non-profit group has taken possession of the old St. Anthony ‘s Hospital complex. The hospital closed many years ago when St. Anthony’s merged with High Plains Baptist Hospital to create Baptist-St. Anthony’s Hospital in the midst of the city’s growing medical complex along Coulter Street in far west Amarillo.

It has fallen, dare I say it, into serious disrepair. I got a first-hand look at it just a couple of years ago while writing a feature story for KFDA NewsChannel 10’s website. The then-owner walked us through the campus and, to point it candidly, it wasn’t a pretty sight. The place is crumbling.

The non-profit organization, St. Anthony’s Legacy and Redevelopment Corp., is led by Mary Emeny, who comes from a family with a long history of commitment and dedication to the community. Emeny issued a statement that declared, in part, “It is a privilege to begin the work of bringing new opportunities and resources to the surrounding communities through this iconic property.”

That statement might need a bit of translation, given the rather broad and nebulous nature of its content. Emeny’s organization hasn’t yet revealed any details of what it intends for the old campus, or how it proposes to pay for whatever it will do.

I have known Mary Emeny for a number of years and I fully understand and appreciate her love of Amarillo and the Texas Panhandle. I am never going to doubt her ability to achieve whatever she seeks to do.

The Amarillo Globe-News named her its Woman of the Year some years back. I do not believe her energy and her commitment have abated one bit.

I wish my friend well. That old campus needs a lot of work. I have faith Mary Emeny will deliver the goods.