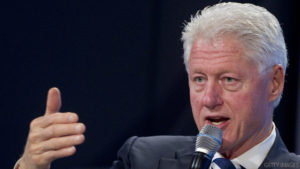 It points out that three men who were involved with the impeachment of President Clinton have been themselves caught up in sex scandals.

All three were — or presumed to be — speakers of the U.S. House of Representatives.

Clinton got impeached because he lied to a federal grand jury about a dalliance he was having with a White House intern. Members of the House were so incensed that they just had to impeach the president for “breaking the law.” The impeachment in reality, though, also was about sex.

The Senate saw through it during the trial and acquitted the president of any “high crimes and misdemeanors.”

Then the nation learned:

Speaker Newt Gingrich was fooling around with a congressional aide while he was married to another woman. He was doing this while excoriating the president for his own bad behavior.

Bob Livingston, who was supposed to become speaker after Gingrich quit, himself had to bow out because he, too, was having an extramarital affair.

Dennis Hastert, who became speaker after Livingston admitted to his own failings, paid hush money to keep quiet his own misdeeds involving teenage boys many years ago.

What’s that saying about those who reside in glass houses?