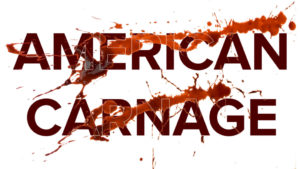 Here’s a statistic that makes me quake.

The United States of America experienced 288 school shootings since 2009. The punchline? That number is 57 times greater than six other industrialized nations combined.

The other nations measured were the United Kingdom, Japan, France, Germany, Italy and Canada.

Gun-rights groups led by the National Rifle Association continue to tell us that we cannot enact constitutional legislation that would somehow stem that terrible tide. How in the name of good government does the NRA defend this view?

I don’t have a legislative cure in mind. Congress cannot muster up the guts to enact universal background checks for every individual who purchases a firearm. Why? Well, I have concluded that the NRA has bullied members into cowering away from taking any measures that would make it harder to buy a gun.

I will not accept the notion that any legislation would violate the Second Amendment guarantee citizens’ right to “keep and bear arms.”

Yet the demagogues keep yammering about how politicians are intent on “destroying” the Second Amendment, how they are dedicated to “taking your guns away.”

The statistic about the number of school shootings tells me that we have to stop the bloodbath. I mean, Donald Trump pledged during inaugural speech to stop “this American carnage.”

Yes. It needs to stop. Now! 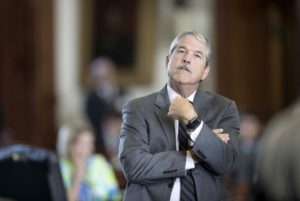 Texas state Sen. Larry Taylor was hurting nearly a year ago, along with many of the rest of this state, not to mention the rest of America. A gunman opened fire at Santa Fe High School in his Senate district, killing 10 people and wounding 13 others.

Taylor, a Friendswood Republican, sought to do something to at least mitigate such tragic events in the future. He has produced a bill that isn’t perfect, but I’ll be damned if I’m going to protest it here.

Senate Bill 11 — which the Senate approved 29-2 and heads for the House of Representatives — seeks to strengthen mental health initiatives in Texas. According to the Texas Tribune, it gives teachers access to telephones and other electronic communications, and establishes threat assessment teams to help identify potentially dangerous students while determining the best ways to intervene before they erupt.

The bill also “requires school districts to appoint school safety committees that meet once a semester to provide their boards of trustees with recommendations for updates to their districts’ multihazard emergency operations plans,” the Tribune reports.

Does the legislation deal with the purchase of firearms, or the access that bad folks have to obtain them? No, but to my way of thinking it seeks a comprehensive approach to seeking out and identifying those who might be prone to producing the kind of insanity that has shown itself too often.

“We cannot afford to do nothing,” Taylor said, adding that too often legislators let “perfect become the enemy of the good.” So, the bill isn’t perfect. It is, however, a good start.

“Multiple young people’s funerals back to back in a few short days is very difficult,” Taylor said. “That’s why we have to get this done.”

Indeed. We mustn’t have to endure such heartache.

I am running out of ways to express my horror at the gun violence that has erupted yet again.

A shooter walked into an Annapolis, Md., newspaper office — the Capital Gazette — and opened fire. He killed five people and “gravely” wounded several others.

Details are sketchy about the gunman. Or his motive. Or even his identity.

School shootings have become the scourge of our society. Gunmen have performed acts of carnage in movie theaters, shopping malls, a country music festival, nightclubs.

What in the name of civilized society has happened to us? 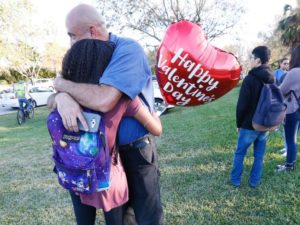 Oh, my! It has happened. Again!

What does one say about this latest spasm of senseless gun violence.

A 19-year-old man opened fire in Parkland, Fla., and killed 19 people in a local high school. Our hearts are broken. Once again!

The man was a former student at the high school. He was expelled for disciplinary cause.

As has been the practice of this blog, I won’t mention the shooter’s name. I don’t intend to give this maniac any more exposure other than to chronicle the incident for which he has been charged by Broward County officials.

I cannot yet fathom how this kind of violent explosion is allowed to continue in this country. The debate over gun control is going to commence in due course, if it hasn’t already.

Fox News’s Shepard Smith today read the list of the shootings since the tragedy that erupted at Columbine High School in Littleton, Colo. “Since Columbine in 1999, there have been 25 fatal, active school shooting incidents at elementary and high schools in America,” Smith said.

For the time being — and as the country continues to digest and process this tale of horror — I am left only to mourn and to pray for the souls of the victims.

When news broke of the shooting at the Marysville, Wash., high school, and it was known that the shooter was a student, one of my first thoughts became: What kind of loner/outcast would do such a horrible thing?

Then the second shock arrived. The shooter was a freshman at Pilchuck High School who was popular with his peers, an athlete and a young man who’d just been named homecoming prince.

Then I watched a former FBI profiler, Clint Van Zandt, tell MSNBC that this case arguably is the most “baffling” he had seen, given that Jaylen Fryberg was the quintessential non-stereotype we’ve attached to individuals who do these kinds of horrifying deeds. Van Zandt essentially said you could throw the profile book out the window.

Fryberg killed himself after shooting another student to death and injuring four others, three of them critically.

The argument will rage once again over how this young man obtain possession of the weapon he used to bring such destruction to the school just north of Seattle.

We’re going to hear from gun-owner advocates that no laws could have prevented this from happening. Gun-safety advocates will argue the opposite.

And look and listen for the National Rifle Association — among others — to proclaim that the U.S. Constitution’s Second Amendment is so sacrosanct that to touch any part of it would render it utterly meaningless.

Interestingly, Washington state voters are going to decide a referendum on the state’s ballot that expands background checks to include all gun purchases.

It’s fair to ask: Would such a provision have kept the weapon out of Jaylen Fryberg’s hands? Probably not.

It also is fair to ask: Do such laws make it just a little harder for nuts to obtain guns … and do they infringe on legitimate gun ownership?

“Yes” to the first part. Absolutely “no!” to the second.

Do you want to know what a hero looks like?

She looks like Antoinette Tuff, a Decatur, Ga., elementary school bookkeeper who talked a gunman out of doing tragic damage in the school where she works.

The stunning 9-1-1 call contains a riveting conversation between Tuff and the gunman who eventually surrendered to police. He did fire a shot, but no one was injured.

Pardon my repeating myself, but we use the word “hero” a bit too loosely these days. The term doesn’t belong to athletes or politicians. It belongs to those who put themselves into harm’s way to prevent injury — or worse — from happening to others.

They are police officers, firefighters, military personnel and now, a remarkably brave and calm school bookkeeper.

“Let me tell you something, babe,” Tuff said to the police dispatcher after the crisis had passed. “I’ve never been so scared in all the days of my life. Oh, Jesus.”

That’s quite all right, Ms. Tuff. Heroes are allowed to afraid.