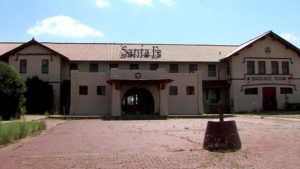 My wife and I talk about a lot of things while walking through the neighborhood with our puppy, Toby.

She mentioned that her brother is coming to visit us in a few days. He’s quite the railroad enthusiast. She wondered aloud how nice it would be to take him to a railroad museum while he’s here.

It cannot happen … because we have no railroad museum in Amarillo!

Then this thought occurred to me: Although this community was built by pioneer families who raised cattle on this vast expanse of land, it also became a hub for the Santa Fe Railroad.

We have an abandoned rail depot just east of the Civic Center. The railroad built a 12-story office building downtown to serve as division headquarters for the company. The Santa Fe Building went dark several decades ago, then it came back to life after former Potter County Judge Arthur Ware negotiated a deal to buy the Bastille-like structure for 400 grand.

And we still have no museum in Amarillo that celebrates the legacy left by the railroad that was such a huge part of this community’s development.

I wrote about efforts to convert the depot building into a museum. I interviewed my friend, Amarillo lawyer Walter Wolfram, whose dream is to find a place to display the artifacts he has collected over many years.

Here’s the link to that story:

As the city marches forward toward redeveloping its downtown district, there ought to be some talk — out loud and in public — about how this community can develop a railroad museum that honors the men and women who toiled here as this community was coming of age.

The Panhandle-Plains Historical Museum recently named a new interim director. That’s a fine venue to honor the entire history of the region. We have a museum along Interstate 40 that honors the quarterhorse and its role in shaping this community. We have a wonderful art museum.

We have Cadillac Ranch, for cryin’ out loud!

Center City is embarking on an initiative to create a cultural district for the city.

It seems to me — as I sit out here in the proverbial peanut gallery — that there ought to be a concerted effort made to clear away the hurdles that have prevented this community from honoring the railroad industry that helped build it.

I was saddened to hear the news this morning about the disbanding of a board dedicated to raising money for a Santa Fe Railroad museum.

However, I got to thinking about the sequence of recent events.

After the board had backed out of a plan to install the museum on the second floor of the Santa Fe Building, it looked at space at the former Santa Fe Depot near the Civic Center. Then the city purchased the depot for as yet undisclosed reasons. Then the Potter County Commissioners Court, namely Commissioner Mercy Merguia, began asking questions about the money the board had raised; Merguia sought an accounting of the funds.

Now this. The board has disbanded.

It’s fair to ask: Is there a connection between the funds inquiry and the disbanding of the board? Is there a there there?

Walter Wolfram, an Amarillo lawyer, has been the front man for the fundraising effort and he expressed sadness that board had been unable to make significant progress toward establishing a museum.

The Santa Fe Railroad played a huge role in the development of this region. It moved freight in the form of harvested agriculture products from the Panhandle to points all across the country throughout much of the first half of the 20th century. The rail company had a division headquarters at the Santa Fe Building in downtown Amarillo. Its corporate presence here was huge.

Then it vanished. The Santa Fe Building went dark in the mid-1970s and remained that way until Potter County bought it for $400,000, renovated it and located several county offices in it.

But there’s no museum. Now there’s no board of directors to oversee raising money to pay for it.

Amarillo can do better than turn its back on the concept of a museum dedicated to such an important part of this region’s history.