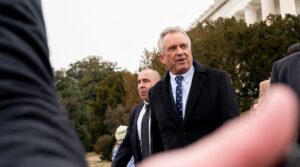 Robert F. Kennedy Jr. has just learned a lesson that I think should be spread throughout the world as it grapples with the issues of the day.

It is that no one ever should compare whatever discomfort one is enduring in the moment to what occurred during the dark, horrible era of The Holocaust. RFK Jr. uttered a most despicable comparison the other day at an anti-COVID 19 vaccine rally in which he bellowed that people who are forced to be vaccinated against a killer virus are enduring trauma similar to what Anne Frank suffered while she was hiding out in her apartment in Amsterdam during World War II.

Kennedy has apologized for his remarks. I accept his apology. I also hope he — nor any other public figure — makes the same hideous analogy ever again.

Anne Frank died at the age of 15 at the hands of her Nazi captors after she and her family were taken from that apartment and sent to a death camp. She was one of about 6 million European Jews who died during The Holocaust, which was the most unspeakable act committed during the 20th century … or perhaps in all of human history.

Kennedy sought to make some odious comparison between what governments are doing now in ordering vaccines to what the Nazis did to Europeans. Good God in Almighty heaven!

I want to add a personal point of privilege. My wife and I saw the Anne Frank Museum in Amsterdam in 2016 and were moved to tears at the tale of horror it told of the suffering she and her family endured while they hid from their Nazi captors.

The Holocaust stands alone and should never — not ever! — be held up as something to which one can compare other controversial acts.

Lesson learned, RFK Jr.? I damn sure hope so.