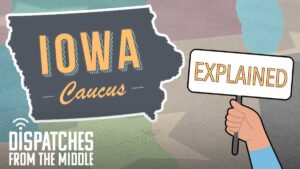 As the nation watches with varying degrees of interest/anticipation/anxiety over the Iowa Democratic Party primary caucus, I want to express a view that dismisses the whole process.

I believe a better, more equitable way to choose a political party presidential nominee is to just let citizens vote for them in the privacy of a voting booth.

The media are trying to cover this Iowa caucus, just as they have so many times before, while tripping over their tongues trying to explain how the process works. To be candid, I still don’t quite get it … and I studied this stuff in college and covered caucuses when I first arrived in Texas in 1984.

I remain an old-fashioned good government progressive, someone who just prefers to cast my vote in private.

Texas used to have a caucus system to select party nominees. I covered a caucus while working for the Beaumont Enterprise in 1984. I attended a caucus in Beaumont and watched as the Rev. Jesse Jackson’s supporters helped him carry the day in Jefferson County.

The state has since then joined the vast bulk of states rely on secret-ballot voting in primary elections.

I suppose the Iowa caucus produces good political theater. It also lends an air of confusion to the rest of us interested in how this drama plays out.