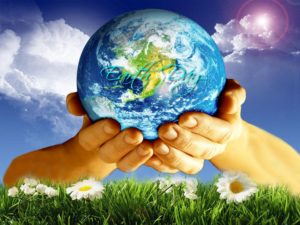 I have been fond of wishing everyone a Happy Earth Day, which I have done repeatedly on this blog.

This year it’s different. It’s vastly different, in fact. We acknowledge the 50th anniversary of Earth Day under a severe, foreboding and ominous cloud brought to our good Earth by the coronavirus pandemic.

Fifty years ago we began setting aside a day to celebrate the only planet we have. Earth is home. That’s it. We have to care for it. President Nixon founded the Environmental Protection Agency in 1970, vowing to exert greater emphasis on ways to protect our precious Earth.

Here we are today. Our worldwide economy has effectively been shut down by the viral infection that has killed hundreds of thousands of human beings.

The “good news,” if you want to call it such, is that our air has gotten much cleaner as we have driven far less. We have nowhere to go. Our motor vehicles are parked.

OK, so the air is cleaner. We still have water pollution issues. We have deforestation that leads to global warming and climate change. We’re still throwing too much trash into landfills. We still are using too much fossil fuel that also spews pollution into the air.

Our minds and hearts, at the moment, are directed at fighting the pandemic. I am all for that effort, to be sure. I do not want to rush into a return to “normal living” while the virus is still infecting and killing human beings.

I do want to wish everyone once more a Happy Earth Day, although I understand completely that our attention is being diverted to more immediately urgent matters.

It just occurs to me that with all the trouble in the world today, Planet Earth is going to have a big day.

Earth Day is upon us.

We’ve been obsessed with a lot of disheartening news of late: that missing jetliner that’s lying in the bottom of the Indian Ocean, the mudslide in Oso, Wash., the capsized ferry off the Korean coast, Russia’s incursion into Ukraine, the Syrian civil war … and a whole of other things that are too numerous to mention.

But now it’s the 44th celebration of Earth Day.

This is the day we’re supposed to call attention to taking better care of the tiny planet all 7 billion of us inhabit.

My wife and I spent a few days in the Davis Mountains region of Texas recently. We took a trip to McDonald Observatory near Fort Davis, where we heard about the construction of a telescope that looks deeply into space. We heard narrations about billions of galaxies floating hundreds of billions of light years away. I tried for a moment to fathom the size of the universe; it cannot be done.

So I’m left to worry about our little, teeny-tiny speck of it that orbits around our relatively insignificant star we call “The Sun.”

Are we taking good enough care of this orbiting globe? Hardly.

We’re polluting our water, cutting down or burning forests, spewing toxic fumes into the air, filling our land with garbage we cannot — or will not — recycle. That’s just the beginning of it.

Earth Day came into being in April 1970, during the administration of that flaming environmentalist Richard Nixon, on whose watch the government created the Environmental Protection Agency. President Nixon had it right then to establish an agency charged with regulating industries’ standards and to hold them accountable for the mess many of them were — and still are — making of the environment.

The EPA since then has become the bogeyman of the far right, which doesn’t like government telling private industry how it should protect the land, air and water. I happen to like the EPA and hope it stays around for as long as human beings inhabit the planet — which I’m supposing will be long after I’m gone.

There’ll be rallies around the world. Well-meaning folks will remind us we can do a better job of protecting the planet. We’ll nod our heads in agreement; some of us will dismiss it as government overreach.

Then the day will pass and we’ll return to wondering about that jetliner and hoping war doesn’t break out in Ukraine.

Earth, though, has a special day set aside. Happy Earth Day, fellow travelers. Take care of this planet. It’s the only one we’ve got.