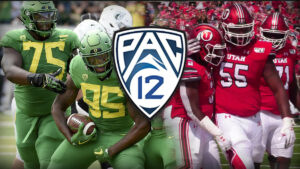 At this moment, your friendly blogger is not at all concerned about the state of politics and the still-brewing cauldron in Washington, D.C.

I am instead going to jump for joy over the score of a college football game. Oregon 37, Utah 15.

What does it mean? It means the Ducks are going to the Rose Bowl, which I consider to be a wonderful consolation prize for a team that two weeks ago was considered a potential contender for a spot in the four-team College Football Playoff.

Then the Ducks went to sleep against Arizona State. The Sun Devils beat Oregon and dashed their playoff hopes.

OK. So the Rose Bowl won’t be for the national championship. Utah was favored to win the Pac-12 title game tonight. The Ducks played with a bit of a chip on their shoulder. The Utes hoped a win tonight would vault them into the playoff quartet. Umm, am I sorry about that? Nope.

The Ducks delivered the goods.

College football has a name for the final week of a long season.

It’s called Rivalry Week. Traditional rival schools square off against each other on the football field. They’re usually in-state rivalries.

For those of us who grew up in Oregon, Rivalry Week takes on a particularly distasteful tag. It’s known there as the Civil War. Oregon vs. Oregon State.

Why distasteful? Well, for one thing I dislike the use the of the term “war” to describe a football game. I’ve had a ringside seat in a real war and a football game bears no resemblance to it, you know?

I even heard Tiger Woods once describe a round of golf, for crying out loud, as being “like war out there.”

You get my drift.

Well, Rivalry Week is going to present some interesting athletic matchups. The Oregon-Oregon State game, for example, will enable the Oregon Ducks to stay in the hunt for the coveted football playoff that will determine the national championship.

First things first, though. They have to beat OSU, then they have to defeat whoever wins the Pac-12 South title in the league championship game to be played at the San Francisco 49ers’ new field at Levi Stadium.

I’ll stick with my original premise.

I wish they wouldn’t call it “war.”