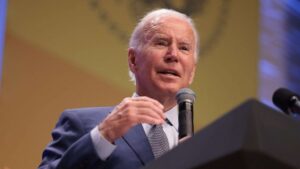 Here I go. I am about to tiptoe into an area that I have avoided discussing on this blog, but which finally has me concerned enough to bring it up: President Biden’s mental acuity.

Now, do not misinterpret where I am heading with this brief post. I do not believe Joe Biden is losing his marbles. However, his latest gaffe — and, admittedly, it was a doozy — is going to bring the issue of his fitness for the presidency back to the front burner.

This week, the president wondered aloud at a press event why U.S. Rep. Jackie Walorski, R-Ind., wasn’t in attendance. “Jackie, where are you? Where’s Jackie?” Biden asked.

The White House is brushing it off. Press secretary Karine Jean-Pierre called it a “top of mind” moment, that Biden had Walorski’s name at the center of his attention span. That’s not good enough of an answer, Mme. Press Flack.

Joe Biden has been prone to this kind of verbal miscue since long before he was elected president. He gets fired up and at times seems to lose his train of thought.

Well, that’s for others to discern. I am not qualified to offer an armchair medical diagnosis of the president’s mental fitness. I do hope — and that’s all I can do, is hope — that President Biden can find a way to eliminate these kinds of gaffes that only serve to feed the multiple rural mills that swirl around the presidency.

He told “60 Minutes” correspondent Scott Pelley to “Watch me” if he doubts the president’s ability to do a difficult job. Well, Mr. President … we’re watching.