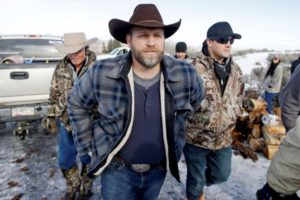 Ammon and Ryan Bundy are unhappy with their living conditions in jail.

You might remember these guys. They took over a national wildlife refuge headquarters for several weeks as part of an ongoing dispute with the federal government over some property issues.

They surrendered after a siege in Burns, Ore. They’re now awaiting trial. They want to prepare for their date in federal court and say they need Internet access in their jail cell. They don’t have it.

They’re being held in Multnomah County, where Portland is located.

Jail officials say they can have IPads, but only if their lawyers preload information they can use.

There’s something strangely weird about these two clowns griping about lack of Internet access.

I surely don’t know this as fact, but something tells me that the Bundys — part of an extreme right-wing political movement — quite likely over the years have complained about prison becoming too much of a “country club” for bad guys. Don’t you think that sometime in their lives they griped about how “good” the criminals have it behind bars?

To hear these guys gripe about lack of Internet access in their jail cell just rings more than a tad bit hollow in my ears.

A lot of lockups these days have extensive libraries — with books in them — for inmates to use.  My strong preference would be for these two clowns to quit griping about Internet access and start cracking open some law texts. 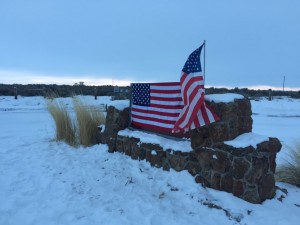 Those yahoos who have taken control of a federal installation have committed a crime against the rest of the country.

Some ranchers who became upset because a couple of their colleagues got into trouble have seized the Malheur National Wildlife Refuge headquarters.

They’re vowing to stay put. The feds and local police authorities have other ideas.

The individuals have taken control of property that belongs to all Americans. The headquarters in Burns, Ore., belongs to me, my family . . .  and to you and your family. We’ve all paid for it with our tax money.

I can hear the logic, though, from those who say that the goofballs who have seized the building have paid for it, too. So, it’s their right to control it as they see fit, the argument might go.

Federal law prohibits the seizure of federal property by private citizens. Aren’t we required to follow the law?

These dipsticks say they’re mad at the feds over the way they treat citizens. Well, I’m angry that they feel compelled to seize property that belongs to all Americans.

It’s not theirs to grab. 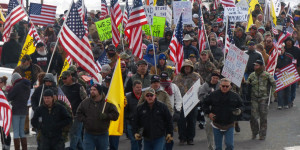 The media have been reporting the arrest of Bill Cosby.

They’ve been talking about the horse race among the Republicans running for president.

They have been yammering about this and that.

Meanwhile, way out yonder in a place where few people live — or even have seen — a group of wacky “militiamen” have taken over a federal facility.

Is that an act of sedition?

Cliven Bundy’s son, Ammon, is among the protestors who’ve taken over the Malheur National Wildlife Refuge headquarters office in Burns, Ore. You remember Cliven Bundy, right? He’s the Nevada rancher who mounted a revolt of his own over federal land ownership issues and became something of a hero to the TEA Party wing of the Republican Party.

Well, now his kid has left his own footprint on the crazy movement.

Why aren’t the media taking note of this craziness?

If it were occurring in a major metro area, with, say, college students taking over a university, you’d think the world was about to come to an end. What might the media do if African-Americans commandeered a federal facility? Would that constitute an act of “domestic terrorism”?

The protestors took over the wildlife refuge headquarters to protest the arrest of two Harney County ranchers. They’re set to serve prison terms. I guess those who protested in Burns don’t think they deserve to go to federal prison. Their reaction? Take command of a government building.

This is a dangerous act that needs a lot of attention and it needs to be stopped immediately.

Meanwhile, I am awaiting the expressions of outrage.