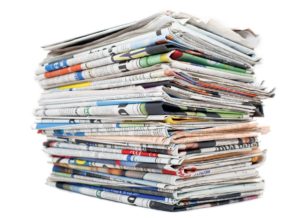 My concern about the future of local print journalism in the community where I lived and worked for 23 years appears to be bearing fruit — and it saddens me.

The Amarillo Globe-News, where I served as editorial page editor for more than two decades, looks for all the world as if it is morphing into something I don’t recognize. Its editorial page isn’t examining local issues, isn’t looking critically at local concerns and those who shape policy. It has become part of a “regional voice” that speaks in unison with another newspaper ensconced 120 miles straight south, in Lubbock.

Today’s editorial — in both papers — tells me this. They are the same. The Globe-News and the Lubbock Avalanche-Journal, both owned by the same company, have expressed identical opinions on what they hope for the “community” looking toward 2019.

That’s right. GateHouse Media, which owns the papers, believes (apparently) that Amarillo and Lubbock have identical concerns. The regions have matching issues they need to confront.

Hmm. Well . . .  they don’t. They are different communities. They used to have newspapers that addressed their unique circumstances through their opinion pages. Residents of those communities used to look to their newspapers for leadership, possibly some guidance — or maybe just as places to hurl their gripes over editorials with which they disagreed.

The media are changing before our eyes, folks. We’re all seeing it. It ain’t pretty, at least not to me, a retired ink-stained wretch.

I was on duty at the Globe-News when the media climate began changing. The company that formerly owned the newspaper, Morris Communications, sought to deal with the changes. It reduced staff, tried to redirect its emphasis to a more “digital presence.”

On the editorial page, I tried to employ a new strategy. I discussed with my publisher at the time an idea to focus our editorial page on local, regional and state matters. My thought was that our readers didn’t care what we thought about national or international issues; their minds were made up and they were getting their “editorial guidance” from other media sources. Given that we served a politically conservative region, it didn’t take a genius to figure out that our readers were dialed in to Fox News, Rush Limbaugh and other assorted conservative voices.

So we sought to write about local matters. The right-wing media geniuses weren’t going to discuss City Council votes, or local public education matters, or whether their county commissioners courts were spending their money wisely; we would fill that void.

We had some success in keeping our voice relevant to the community mood.

I left the Globe-News in August 2012 and went on to “pursue other interests.” The newspaper abandoned the local-only strategy I had developed. Morris sold the Globe-News and the A-J — along with all its newspaper properties — to GateHouse. The new owners changed publishers and brought in a guy to run both papers, an executive editor to oversee both newsrooms and a “director of commentary” to write editorials for both communities.

Therefore, the local voice in each community has been muffled.

I quit relying on my ol’ trick knee to make political predictions, but the knee is throbbing again. It’s telling me the West Texas media landscape — from the Panhandle to the South Plains — is going to have a single voice speaking for the entire region.

Welcome to the new world. Wow!

This ink-stained wretch is saddened by what is happening.